Part two of our micro-adventure was to visit the fortified city below Fort Liberia. Built before the fort, this ancient city was the capital of the region when it was part of Catalonia. The principality of Catalonia was divided in half in the mid 17th century when the Treaty of the Pyrenees was signed. The northern region, including the fortified city of Conflent, became new lands of King Louis XIV.

The main industry here for centuries was the manufacturing of material. The village was famous for its fabrics and they sold throughout the European continent. Each bolt of fabric was labeled with the towns crest as proof of its origin. This emblem consists of two towers, a star and water, surmounted by the Catalan colors of red and gold and topped with the crown of Aragon. Because the fabric was so highly sought after the weavers of the city were not taxed for this commercial asset. This move on the part of the government gave the city its name “ville franche” or “free town.”

The village was built at the confluence of two rivers, the Tet and the Cady. Literally built at the river’s edge as part of the city’s defense. More formal fortifications were made and Cova Bastera (barracks built into an existing cave) added at the same time Fort Liberia was being built to strengthen the defensive system of the village under the direction of the king’s military architect, Vauban. Though these additions did not stop General Ricardos’ Spanish army from taking the town without a fight in August of 1793.

The town consists of just two narrow streets and several open squares with four main entryways, none of the original gates exist and the drawbridges have been gone for awhile, but the inner workings of the bridge lifts are still in place near the Porte de France, the place we first entered.

We ate lunch at the only restaurant available, Cafe Le Canigou, which thankfully advertises that it is open 7 days a week, 365 days a year. The restaurant overlooked a small square which had views of Fort Liberia and the Mushroom Museum.

Probably the quaintest feature we found in this tiny village was the continued use of signs advertising the wares of the businesses. Though more modern, we loved the use of this medieval advertising method from a period in history when the average person could not read and thus signs advertising the type of business were necessary.

As is often the case, we always notice that each new village or town has at least one thing we have not seen in other small locations. For Villefranche-de-Conflent it was the marble signage with instructions on the correction of the sundial to have the exact time in any season.

Villefranche-de-Conflent and Fort Liberia receive over 80,000 visitors a year, but our suggestion is to avoid the crowds and visit during the off-season when you have the opportunity to visit at your leisure and enjoy the quaint beauty without hordes of people pushing you through the street.

One of the four city gates

Villefranche-de-Conflent battlement along the Cady river

Fountain in front of the city

View of the battlement (foreground) and Fort Liberia (above)

Pulley for the drawbridge 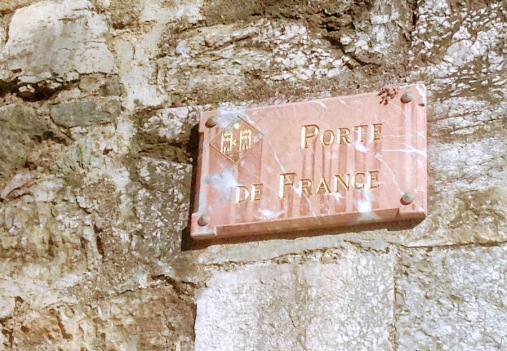 Name plate for the French gate

Alley to Cova Bastera, the military barracks built by Vauban into an existing cave 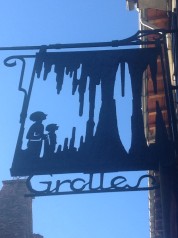 ATM built into an old entryway 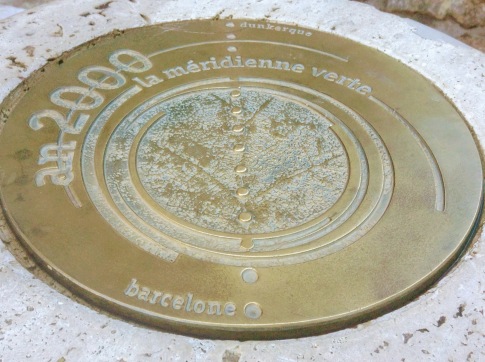 Medallion in front of the town hall 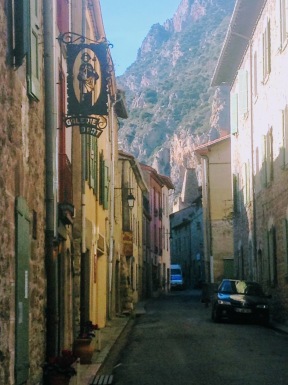 One of the two main streets within the city walls 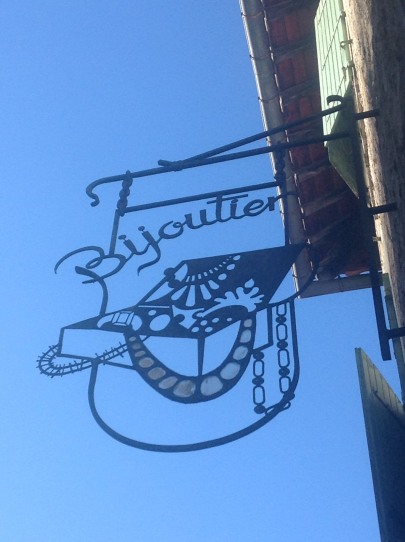