In June of 2016, I had the opportunity to witness our daughter, Dallas’, university graduation. After three years of toiling away, she graduated with her Bachelors’ degree in Juvenile Justice. We are always proud of our children, but there are days that the pride we feel just about takes our breathe away. June 11 was one of those days.

Dallas is one of those kids who never seeks the spotlight for herself, but quietly accomplishes amazing things. She played tackle football on a Pop-Warner team for two years as starting corner and starting receiver. She never complained that it was difficult, not even the time when she broke her finger or the time she had the wind knocked out of her so hard she could barely breathe.

She was not our best high school student, but in her final year managed to put together three years of classes by finishing her standard course load along with classes at the community college and correspondence courses at home. She was never afraid of working hard to get what she wanted.

After high school, she joined the US Army and served our county in Afghanistan. She was trained as a mechanic and worked on vehicles that were the size of medium-sized homes. While in Afghanistan she drove as lead for her unit making supply runs to assist with ongoing operations. She had the opportunity to meet and have meals with members of the Afghan Army; her translator was friends with one of the generals. She told me that she enjoyed the food and the people she met there.

We were in Colorado Springs the day she returned from Afghanistan. That was the last time I was in The Springs, as the locals call it, until this last June. I had met a few of Dallas’ friends on early morning (for me) video calls from the daughter, but had not had the opportunity to meet her friends in person. What an amazing group of people. But then I would expect nothing less from my amazing daughter. 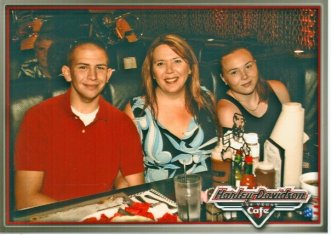 Dallas and her friend, Daryl 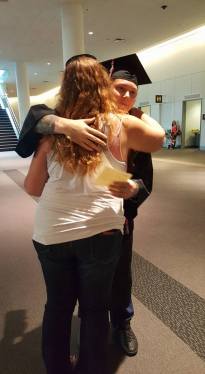 Last hug before the big event

Dallas, Kayla and their favorite counselor

Dallas and her father, Dirk

Dallas and her friends 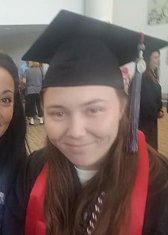 As the last of the kids graduated from college we offered each of them three options for their grad gifts. Dallas selected the “be present at the graduation” option (the other two were a trip for two to France or the cash equivalent of the trip). While Alan regrettably stayed behind with the dogs, whose regular sitter was on vacation, I managed to avoid the train, bus, and metro strikes happening all around France and Spain and make it to the States without incident.

I should note here that Norwegian Air Lines was a fantastic way to get there and back. I was able to book a flight from Barcelona to Oakland for my arrival flight and from Las Vegas to Barcelona for my return which allowed me to visit all of the grandkids along the way! The airlines is one of the best options for the pocket book as well and is adding new flights all the time.

My friend Echo Lynch accompanied me to Colorado Springs which made the drive more fun than I can even describe. I have not missed much from my days working at the college, but she and other friends have been sorely missed so it was great fun to spend time with her. She has also known Dallas since she was a little kid so she had an investment in attending this child’s graduation as well.

The three of us had a great time visiting Garden of the Gods, Manitou Springs and the Manitou Springs Cliff Dwellings. Echo had the opportunity to visit the waterfall while Dallas took me to meet another friend, Maria, a tattoo artist and shop owner who did my latest tattoo and a lot of Dallas’ art as well. Maria also does fine art and has been encouraging Dallas to continue with her art as well. My daughter is a talented mixed-media artist. In July Maria held a show where Dallas had 10 pieces on exhibit, she sold three pieces.

The ceremony was on the 11th in Denver. Dallas’ Dad and his wife also attended as well as a plethora of her friends. It was a lovely ceremony and everyone rowdied up when she walked across the stage. I promised her I wouldn’t cry, but did all the same. Pride gets me going every time and I was one proud Mom!

That evening her friends Daryl and Chantal hosted a reception for the new grad. Daryl is a great chef and the food was fantastic. I made one of Dallas’ family favorite recipes and that was a hit as well. The daughter and her friends taught me the fine art of beer pong (though they play with water rather than beer). I was never as good an athlete as my children and this was quite apparent during my attempts to put a ping-pong ball into a red Solo cup half-filled with water!

My failed attempts at beer pong aside, Echo and I had a fantastic time in Colorado Springs. It was great meeting in person the people who are closest to my youngest daughter. She has a great support structure of amazing people. Heather, who has the enviable ability to speak truth with a hint of humor, is blessed with two adorable boys with one more on the way. Chantal, who I met for the first time on a video chat while she and Dallas were partying one night, who is a delightful and charming young lady. Daryl, a young man with a winning personality who is an amazing chef, and who is Chantal’s other half. Drew, Heather’s husband, who has a no-nonsense personality that I love and the most amazing sense of humor. Maria, a truly talented artist that encourages others to reach their potential as well. Kayla, Dallas’ fellow graduate who supported and encouraged Dallas’ education efforts. There were other friends there as well, though I did not have the opportunity to get to know them as well. Her “Springs” family are all amazing people and I was truly blessed to get to meet the people who encourage and support her. We should all be so lucky to find an amazing team of people to call friends.

So congrats to you Baby Girl! We couldn’t be prouder of you . . . at least until there is a return trip for that Masters’ Degree you mentioned! 🙂 Give my love to all your friends, I miss them almost as much as I miss you!