This post is mostly for my mom, so she can see where we are living!

This first image is not to scale, just a general layout of the apartment that I threw together in Photoshop.

The apartment is roughly a square and there isn’t a ton of insulation so you do hear the neighbors from time to time, but after living with eight kids noises don’t really bother us anymore! However, you can also hear the church bells from St. Nazaire in Le Cite and from St. Michael’s down the street. It’s a happy sound and one that I fell in love with while we were in Italy, although the bells in Italy are much, much louder!

In addition to the church bells, we had the added treat of someone playing the sax with gusto late last night. But these are comfort noises and we had no trouble sleeping.

Most buildings in our area date from the late 15th to early 16th Century but we do not have an exact date on when our building was built. We do know that the interior was nearly completely gutted and remodeled about 5 years ago. The new owner, our landlord Jason Carr, did a fantastic job keeping as many of the original details as he could salvage. The handrail on the staircase is original to the building and was handcrafted to fit the narrow space a long time ago. 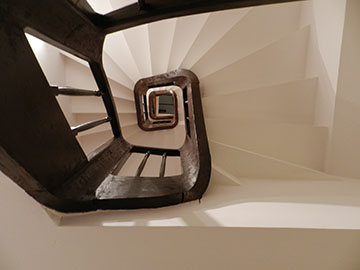 In addition to the handrail, nearly half of the ceiling in our apartment as well as the two big beams are also original to the building. They were repainted in the original whitewash color (which has a slightly blueish tint). One section also has three of the original nails, hand hammered and looking a bit like large horseshoe nails.

There is a city council group that deals with renovating old buildings and they check that anything that can be seen from the street is restored or as near to period as is possible to achieve when someone renovates an old building in the Ville Basse. We are lucky to be in the front apartment and therefore have some of the original ceiling and beams in our apartment. 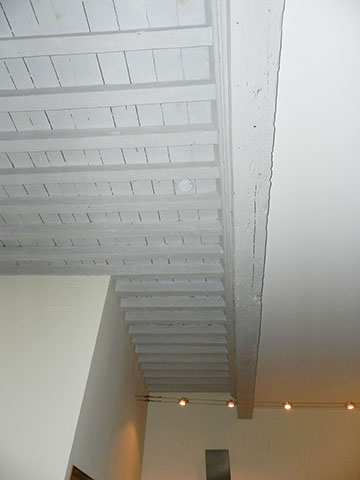 In the living room the furniture is mostly from IKEA, but it’s solid and comfortable, a lot of blue which Alan loves and the minimalist approach to filling the apartment works well for me as I have an issue with clutter. There is a flat-screen tv with both French and UK satellite channels, but we rarely turn it on. The couch converts into a double bed for guests which will be useful in the near future. The windows in both the living room and bedroom have small window seats and large shutters than can be fully open to allow passive solar, closed part way for privacy or even closed fully to keep out the hot summer sun. We love that the shutters here are practical and not just a design feature. 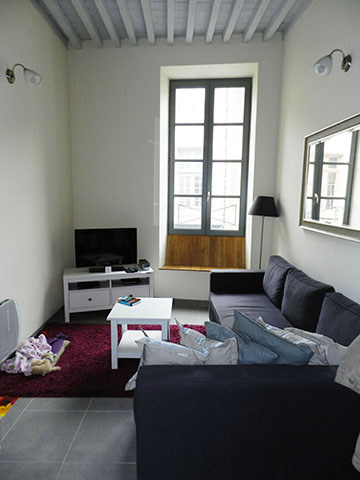 We did set up Kiara’s stuff in front of the heater. Our poor little girl hardly has any hair and is not a real fan of tile floors, so keeping her from shivering is a constant battle. But she loves, loves, loves the rug, even though it’s practically magenta in color, so much for her taste in decor.

She also has her own little espresso cup for water and a travel container for her dry food – which she rarely eats. 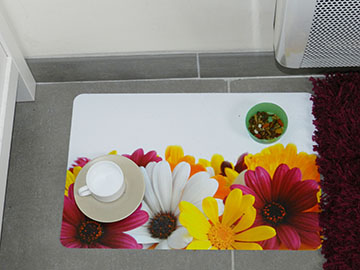 The dresser is in the living room, which we both thought odd at first. I added some of the pillows from the couch to break up the white on white color, a couple of photos I brought with me (the small one on the left of the pillow is my Mom and Dad, on the right is our Max), a knick knack that my mom got me before we left about daughters, and we use the vase to store wine bottle corks!

However, since the dresser serves as a place to store camera/photo equipment cords and backup drives (first full width drawer), our bath stuff (top left), Kiara’s closet (top right), the “overflow” drawer (bottom) as well as a dresser for socks and stuff, it’s becoming less of an oddity than it was on day one. 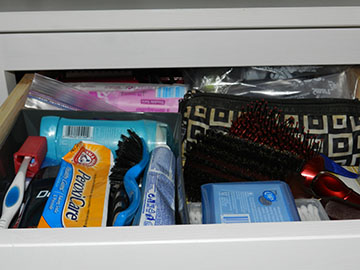 There is a bookcase that we use to house our laptops and camera stuff next to the dining room table and next to the dresser. 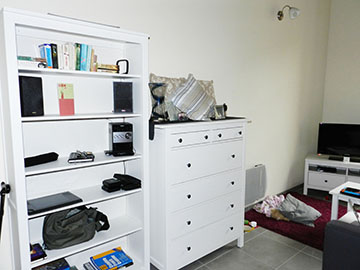 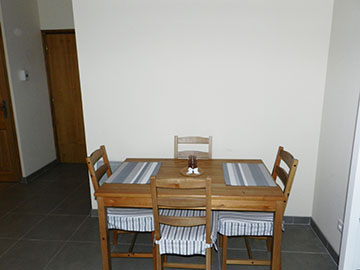 The bathroom shares the wall in the dining room and is surprisingly spacious for a European bath. The corner shower allows more space than we anticipated. Our hotel in Florence in 2011 made taking a shower an epic event, it was just wide enough for me to stand in without turning and I had to duck to get my hair wet. Alan’s relief when he saw the shower in this apartment was practically comical. The one feature I really like is the towel heater. Not only does it warm your towel while you shower it radiates just enough heat to be comfy while doing your hair too. 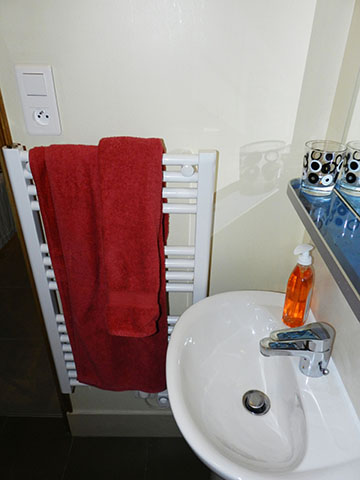 The kitchen is actually larger than the one we had in our apartment in Sparks. The fridge looks like a pantry as well as the cabinet that houses the microwave. The crisper drawers in the fridge are each about 7″ x 7″ x 6″ they are “cute.” The kitchen already had dishes, cookware, flatware, glasses, and cooking utensils. But we still picked up a few things which we felt were a big necessity like a corkscrew, mortar and pestle (which weighs about 10 pounds), bottles for olive oil. We also picked up drawer organizers for the dresser in the living room (I dislike clutter in drawers too). Probably the oddest thing in the kitchen is the washer/dryer combo unit. The barrel inside is only about 9″ deep and it takes approximately 4 hours to do a small load of laundry, but it gets the clothes clean and doesn’t make a lot of noise.

The bedroom is on small side but when the door is closed and the heater is on, it’s super cozy. We had really minimized our possessions before moving, so even the small armoire is more than enough room for all our clothing, though we did pick up additional hangers from IKEA so that everything had a hanger of its own. Another weird issue of mine. The pink thing in the bottom of the closet is Kiara’s travel playpen, it’s like a mini pop-up tent with tons of room for her and her stuff. 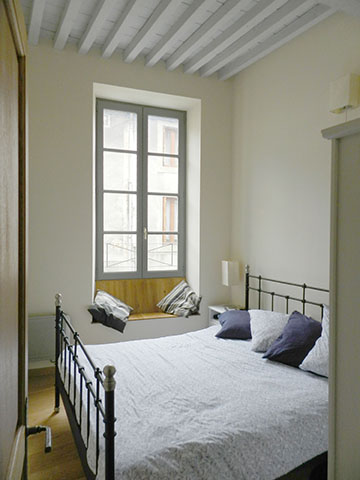 We feel like we’re getting a handle on the European apartment and small space lifestyle. We still find challenges once in a while, but all in all, it’s a nice space in a historic area. Alan and I have heard that tourist season is a little crazy in our neighborhood, but we are not expecting it to be any different than Hot August Nights or the Rib Cook-off events we’ve attended for years.

We know that small and minimalist spaces and apartment living may not work for everyone, but did we mention that there is a freakin’ CASTLE in the backyard??

8 thoughts on “Our Carcassonne Home”

Follow An Italian Point Of View on WordPress.com
Join 341 other subscribers