We had to make a trip to the Apple Store today. My baby is sick and needs therapy. Those of you who own Macs will understand. The average PC just needs a medic, a Mac needs a therapist. The actual report listed a “panic attack.” Apparently that is what it’s called when your MacBook doesn’t understand what it’s supposed to do next, it has a panic attack and reboots, all on it’s own. It’s kinda freaky to experience since Macs tend to be pretty hardy, at least mine have always been, so when it got sick I got worried. Thankfully we anticipated future issues when we bought the MacBooks 2 1/2 years ago and purchased the Apple Care Warranty so the new logic board will be replaced free of charge.

I was a little worried that with practically no French language skills that it might be difficult to explain the problem, so last night I stayed up late and used Google Translate to translate into French the problems I was having, what the report said, and a couple of helpful phrases like “May I use one of the computers to open Google Translate.” This trick has been pretty helpful over the last 6 days. When we get stuck with pronunciation, we just hand the person the notebook. Alan did this at the train station on Friday when we had to purchase tickets for today’s jaunt to Montpellier (a 2 hour train ride from Carcassonne, with a transfer in Narbonne — you really want to get the right tickets). Amazingly, though, today I didn’t really need it as the young man at the Genius Bar spoke very good English, and with a Scottish Brogue — which is always pleasant to the ear (Cheers Gregory).

We have found that by using this little trick of anticipating what we may need to say and then attempting to say it in French prior to handing over the notebook is actually getting us a really nice response from the French people we’ve been interacting with. In nearly every case, the person has switched from French to English — except the poor gal at the Post Office, but sign language helps too, not as in American Sign Language, but that sign language you would use with a small child or an animal where you point to something and then to something else like the section on the certified mail receipt and the address your sending mail too. But it’s been working and we’re getting by without too much trouble.

The people that intimidate me are the ones that start speaking in French after you’ve said “Bonjour!” and think you may actually know the language, it’s kind of sad and a bit of a poke to the ego to see the look of disappointment come into their eyes when they realize that’s all the French I know. Oddly enough, Kiara doesn’t seem to have the same problem. Apparently cute is cute in any language and the “aww” that escapes peoples lips when they realize she’s a social butterfly sounds pretty much the same in English, French, and Japanese (at least I think they were from Japan, they were super friendly regardless).

Anyway, for today’s adventure we had to navigate the train system, Carcassonne to Narbonne, a switch of trains then Narbonne to Montpellier, then outside the Gare du le Montpellier, Saint-Roch (train station) to the tram across the street to the Odysseum Mall. We found the Apple Store with an hour or so to kill so we had coffee and danish (chocolatey, warm and yummy) and wandered through some stores. We came across a place called Geant Casino and it’s like the Walmart of France. Great deals, huge lines and an entire aisle of hair care appliances. YIPPEE!! While they did not have the In-Styler I was hoping to find, they did have something similar, and that was good enough for me. Blow dryers are nice by they are not exactly a styling tool, the girls out there will understand.

We also found that the Montpellier IKEA was in the same area so we decided to check that out after the Apple Store appointment. Swedish meatballs . . . need I say more. While we did see Subway and McDonalds franchises, we passed right by those without a second glance. But when we found the cafeteria in IKEA and the sign showed Swedish Meatballs on the menu, that was right up our alley. I am a pretty good cook, but I’ve never been able to make meatballs that don’t taste like little round hamburgers. It was like Mecca for the tummy. And they serve wine, by the glass, by the bottle and even from a miniature wine cask where you can fill a tiny carafe with about 6 oz of wine . . . Alan liked that very much. I cheated and had my first soda in a week, not my first choice but red wine when I’m cold and wet has the same effects as taking a sleeping pill for me.

On our way back to the Gare du le Montpellier, Saint-Roch we noted that we still had about 90 minutes to kill before our train was leaving, so upon arrival at the tram stop, we headed over to the Jardin (garden) at the intersection of the train and  tram stations. It’s obvious spring is on its way here in the Languedoc with everything budding up ready to bloom, but I was still surprised to see the amount and variety of flowers already in full bloom in the jardin. It was raining and we were fully loaded down with purchases from the mall, but I still managed a couple of photos that were not half bad.

After a few minutes of wandering through the garden, we had had just about enough of the rain and headed to the Brasserie du le Gare and ordered up a couple of espressos and sat in the warm, cozy interior until it was time to head to the train.

Upon arrival in Carcassonne, we hopped off the train and started the .6 miles back to our apartment. It is rather amazing how fast a half-mile can become a “short” walk to someone who no longer owns a car. We have been averaging several miles per day on foot and after six days, it is hardly even noticed anymore . . . the rain however, is another story. We are looking forward to the dry season, as one gets plenty tired of being wet really quickly. On a side note: I now own a new umbrella! 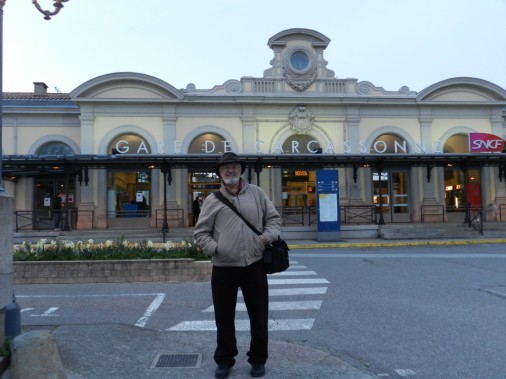 At Gare de Carcassonne for our first train trip!

A nod to the daughter, Dallas, who is also quite talented with a spray can and canvas.

Full bloom at the Jardin

2 thoughts on “Trip to the Apple Store in Montpellier”